As a child of Yorktown there is so much about the town that I know and love. Stories abound about our town and when researching my primary passions, the Croton Dam and the Croton River Valley, I often stumble upon other interesting historical data. Mildred E. Strang is of particular interest and was even the subject of another blog. In researching Miss Strang, I stumbled upon some information that drew me into a tangential search that led to some interesting, if nearly forgotten, Yorktown history.

When I was quite young and the John C. Hart Memorial Library was nothing more than a trailer parked next door to the Town Hall and across from “Kear’s” (The Meadows Farm), my mother would take me there to browse while we both enjoyed the air conditioning on a hot summer day. On those shelves I found a treasure trove of books that likely guided me to teach history. I also found books that were connected directly to Yorktown, which as a young boy fascinated me.

My favorite book combined my obsession with trains in general and the abandoned Putnam Division in particular. The Country Train (1950), by Jerrold Beim (born Gerald), was a regular on my list of books to borrow. As I read that book with my mother, we turned the page with anticipation to see Train 831 stopped at the Yorktown Heights station. WOW! A book about my own town, about “my own train,” and even showing Croton Heights (my neighborhood) and the Hanover Street camelback bridge from which my father and his friends had thrown small pebbles into the smokestack of the steam engines as they moved through town on their way to Brewster or to the Bronx. 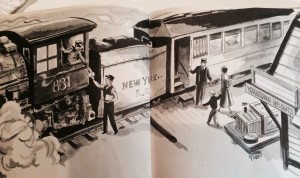 Ten years ago, my son Christopher was born and, of course, we both enjoy trains, visiting the Yorktown Heights station, and learning about the history of my hometown at the museum. The power of the Internet being what it is, I hunted down this book – The Country Train (1950). It was exactly as I remembered – and now I had the author’s name again – Jerrold Beim. Searching various websites, I slowly purchased most of the books that were written by him out of curiosity about the Yorktown connection. As I read the books, connections to Yorktown and, even, my family, became apparent. The Country Fireman (1948) featured a small firehouse clearly modeled after the one that once stood behind the current firehouse in Yorktown Heights (and was torn down in recent decades) with mentions of Underhill Road. 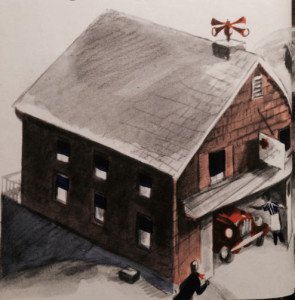 From: The Country Fireman, William Morrow & Co., 1948 (by Jerrold Beim and illustrated by Leonard Shortall)

The Swimming Hole (1950)(my mother’s favorite, as I recalled after reading it again) was about Junior Lake and included, as my mother felt sure, one of her friends from Yorktown Central School. With Two is a Team (1945), by Lorraine and Jerrold Beim, these books were groundbreaking in that they broke racial barriers and addressed racism directly, according to the Oxford Encyclopedia of Children’s Literature. In fact, Two is a Team is generally considered the first children’s book in America to portray a friendship between an African American and a white child where both are on equal footing. This book was also the first children’s book illustrated by an African American, Ernest Chrichlow, who is best known for his work on Dorothy Sterling’s Mary Jane (1959). 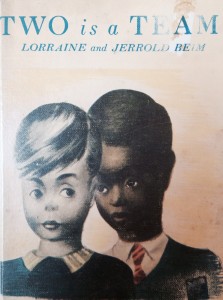