The following is via the Research and Preservation sub committee of Yorktown Historical Society.

This week we begin a new series exploring the world and properties of the Field family of Mohegan Lake.  You may be more familiar with their relations – the Field family of Hunterbrook’s Fieldhome and Peekskill’s Field Library.  The Fields eventually owned almost all the land between Strawberry Road and Route 6, including Westfield Farm.

The Field family was established in Yorktown by the 1740s in the Hunterbrook area, the main Field family farm is the site of the Fieldhome today.  It was to there that William Hazard Field (1833-1888) was brought at the age of one in from New York City, to live with his Aunt Jerusha after the death of both his parents.  William settled in Mohegan in the 1850s. He married Augusta Currie Bradhurst (1846-1919)  Both are pictured below. He built his home on the corner of Route 6 and Lakeland Street, back in the day when Mohegan Lake was well kown as a summer resort area.

There were quite a few illustrious relations that preceeded the generation of our study but perhaps the most famous would be Samuel Osgood.

Samuel Osgood (1748-1789) was a member of the Continental Congress, first Commissioner US Treasury and Postmaster General under George Washington.  He fought in the battles of Lexington and Concord and was a delegate to the Continental Congress. They are also related to Cyrus Field who was responsible for laying the first trans-Atlantic cable. 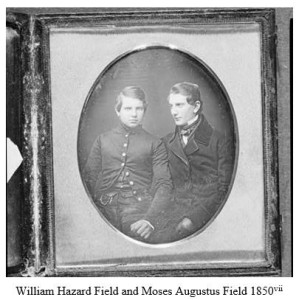 The Fields main residence was Manhattan, they treated Mohegan as a summer residence which was becoming more common.  Lake Mohegan in the 1870s was still very much inhabited year round by farmers and dairymen, with the summer boarders only just coming into vogue.  William Hazard Field’s source of income is unclear, however the Field family had a successful pharmacy, commercial drug business and real estate businesses in Manhattan.  A newspaper obituary states that he went to West Point but did not graduate, “[He] lived 4 or 5 years in Europe traveling and collecting books.  He was never actively engaged in business, his life spent in study and travel.

The Country Garage (1952) was about a small gas station and repair shop owned and operated by to brothers – uncles to a boy named Seth (named for one of the Beims’ sons, whose names appeared in several books, as well as their daughter, Alice) who helped them out pumping gas. The garage, located just off the “parkway,” provided assistance to people who had accidents or were caught in the snow or just needed gas and an oil change. While not specifically stated, the description was eerily close to Tompkins Garage on Route 129, which opened in 1932 and was operated by Henry and Douglas Tompkins, often with their nephew John R. Tompkins, my father, helping out and who eventually owned the garage.

In researching Mildred E. Strang, I also came upon a reference to the Yorktown Community Nursery School and its founding within the milieu of the “Strang changeover years in Yorktown, or that era just after World War II.” (Anniversary Booklet on Mildred E. Strang, 1968) “Mrs. Jerrold Beim (Lorraine) was re-elected as co-chair of Yorktown Community Nursery School at its organizational meeting held in the Town Hall.” As an author in her own right and a progressive person, as indicated in her writing and dedication to early childhood education, Lorraine Beim had an impact on children’s literature and on the Town of Yorktown as it went through its own transformation from a small farming community to a bedroom community for New York City in the post-war era. The family, Jerrold and Lorraine, Alice, and the twin boys, Seth and Andy, resided on Van Cortlandt Drive (Circle). 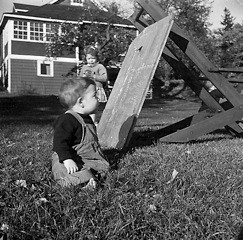 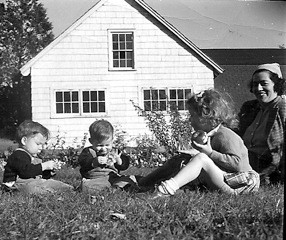 The Beims moved from Yorktown to Arizona where, during a summer trip to Mexico to celebrate the publication of one of their books in June of 1951, they had a car accident in which Lorraine Beim and their daughter, Alice, were killed. The untimely death of Lorraine Beim ended what was a fruitful career as a co-author with her husband, and as a prolific author in her own right. After recovering from their injuries, Jerrold Beim and his twin sons, Seth and Andy, returned east where they lived in Westport, Connecticut. On March 3, 1957, The Bridgeport Sunday Post stated “Death is no stranger to 11-year-old Andy Beim, who was orphaned when his father and twin brother were killed in an auto crash here (Half Mile Common, Westport) today.” Only six years later, Jerrold Beim and his son Seth slid off the road just a quarter mile from their home and died in another car accident. The story was a tragic one – one that ended lives, broke up a family, and left a young child without any parents or siblings. The story made me search some more until I came upon a site with a blog about the Beims. I learned that Andy Beim was living not very far from Yorktown. 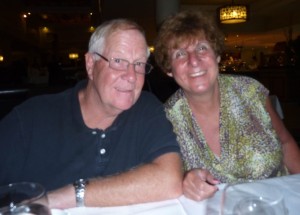 As any historian knows, we must track down all leads and make personal contacts wherever possible for primary source interviews. After reaching out on the blog, I was contacted by Sharon Beim, wife of Andy Beim. With great kindness, the Beims joined my wife and me for dinner where we had a wonderful time learning about the Beim family, their dedication to education and writing, and to their renewed interest in Jerrold and Lorraine as renowned children’s authors who, in spite of their untimely and tragic deaths, impacted the literary world and the lives of children in innumerable ways through their extensive, inclusive, and incisive writing. Our plan is to return to Yorktown with the Beims, to reintroduce Andy to the town he once called home and a place that is enshrined in Children’s literature as a result of the work of his parents Jerrold and Lorraine.  To think, all this started with a simple trip to the John C. Hart Memorial Library over 40 years ago and was spurred on by my life-long interest in the Old Put and Yorktown history.