We continue our history of the Field family of Mohegan Lake….

Photograph courtesy of The Grolier Club of New York

William and Augusta had a daughter Mary Pearsall Field in 1868.  Their son William Bradhurst Osgood Field (WBOF) was born in Switzerland in 1870 and died in Mohegan Lake in 1949 on the large estate he had assembled over the course of his lifetime.  Field owned some 50 acres on the corner of Strawberry Road and Lexington Avenue, with his holdings on Lexington reaching down almost to Route 6.  Adjacent to his property, his sister Mary owned 19 acres with 1,100 feet fronting Main Street in Mohegan.

Field was a renowned collector of books, coins, crucifixes, art and Indian artifacts.  His collection was “said to be unrivaled in the richness of its English and American nineteenth-century caricature and illustrated books.  His coin collection, an important one specializing in Massachusetts issues of the seventeenth century, is at the museum of the Numismatic Society of America…he had 3,500 original watercolors of Edward Lear, the English traveler and humorist.” NYPL Collection 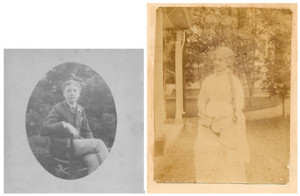 WBOF spent his summers swimming in Mohegan Lake and exploring the forests and streams with his sister Mary.  He recalled it as a place full of fun and family, some who came up from the city for overnight stays, and others visiting from nearby, like his Uncle Gus and his relatives in Peekskill.

His sister Mary and he warmly remembered a house filled with music, their father William playing the piano and singing “the old tunes of the Civil War period Nellie Bly, Old Dan Tucker, Old Folks at Home….”

When they ran out of room in their house, the overnight guests stayed at various boarding houses and hotels in the area (including the Jones Hotel across the lake, Fry’s Hotel in Jefferson Valley, and the St Nicholas at Mohegan).  Chief among these was next door at a building, razed in 2016, known as “The Barracks” and, more formally London’s Studio Apartments. 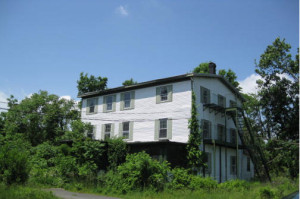 Recent photo of the London’s Studio Apartments / The Barracks, prior to demolition.

WBOF found the Barracks was a loud place, the husband and wife’s quarrels easily heard throughout the neighborhood, the husband Emerick shouting out commands from his perch on the porch to his wife who would be toiling in the garden.  WBOF recalls:

Next door was quite a large house owned by Emmrick [sic] Crawford who ran a boarding house where the family who was not staying with us boarded.  Rachel, his wife, was a remarkably fine woman of her kind.  They had three children.  As time went on the boarding house ran down.

I bought the house to get away from the noise. And gave it to my mother.  During the time it was a boarding house it was very celebrated for its excellent food [Mrs. Crawford was the cook.] NYPL 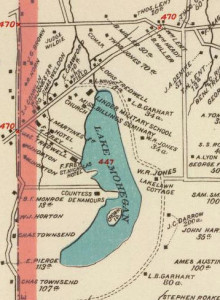 The building was sold by Emerick and Rachel Crawford to Field in 1902 and his estate sold in 1950 to Emma London (hence London Apartments).  As the name might imply, it was also most likely used as an ad hoc dormitory for the Mohegan Lake School, situated across Main Street.

There was endless space to explore in the neighborhood:

A footpath led to “Over Yonder” that was after the name of a small house built by my sister where she could go …..Then on through a rustic gate, through a swamp and so on to Strawberry Hill Road, down to the mysterious place known as Peter Gales, a curious old hermit who lived in a house…..over Oregon.

In the same unpublished 1945 memoir, held by the New York Public Library, Field recalls his neighbors:

General Daniel E Sickles who lost a leg at Gettysburg and shot a man in Washington.  [A Civil War general, a post-war diplomat (including Minister to Spain under President Ulysses S Grant) and, the acquitted assassin of the son of the author of “The Star Spangled Banner”, Philip Barton Key II.]

Dr Bailey, USA [United States Army] who told me stories about the Indians and fighting on the Plains.  He brought me an arrow from one of the chiefs, called Crazy Horse. His brother afterwards became the clergyman at St Mary’s Church.

Note: We are indebted for help on this article to the staff at the Manuscripts and Archives Division. The New York Public Library. Astor, Lenox, and Tilden Foundations., for use of the William B. Osgood Field papers.  as well as Patrick Raferty of the Westchester County Archives.  Materials in this article may only be used with the permission of the supplying institutions.